A new defibrillator has been installed outside Thorpe Marriott Village Hall and community chiefs want to make sure residents know it’s there.

The life-saving device was bought by Drayton Parish Council and will be available 24/7 in case of emergency.

Mandy Marshall, chairman of the village hall, thanked the parish council for the donation. She added. “The defibrillator is located outside, on the right-hand side of the front entrance to the hall, which is located by the shops and pub in Acres Way.”

A number of people underwent training to use the machine under the expert guidance of a representative from the East of England Ambulance Service NHS Trust. As well as learning how to use the defibrillator they were taught basic CPR (cardio-pulmonary resuscitation).

Mandy added: “When someone has an emergency situation where a patient has stopped breathing, by dialling 999 the ambulance service can direct someone to the nearest defibrillator, provide them with a code to open the protective cabinet, and the defibrillator device will ‘talk’ them through exactly what to do, potentially saving lives. Having fully-functioning units available locally really will help to ensure the safety of everyone.”

Graham said “I found the training very informative and it included the opportunity to practise CPR and how to put a unconscious but breathing casualty in the recovery position”.

If you go down to Drayton, Taverham or Thorpe Marriott in August, you’re in for a big surprise…
The latest Fun Hunt will feature paper teddy bears displayed in windows around the area to give youngsters something fun – and free – to do during the summer holidays.
Organiser Sophie Garrod said: “Lots of people, including businesses, create a teddy bear, decorate it however they want to, put it in their front window and children go around and try to spot them.”
She is putting together an online map of where all the bears will be between August 1 and 15 so the hunters can follow it.
“The idea is for the children to find as many as they can and then their parents can reward them any way they like – maybe a treat for spotting 10… It’s just something fun for them to do and, most importantly, it’s free!” said Sophie, who has three young sons  – George, Harry and Alfie.
She said she already has 46 people who will have bears on display, but more are welcome.
“There’s a template which people can use – just let me know through our Facebook page,” she said. “It’s great fun and it doesn’t take long. We had an Easter egg hunt at Easter and it was lovely getting all the photos afterwards.”
She said she also planned to do a snowman hunt at Christmas.
Anyone wanting to decorate a teddy or look at the map should get in touch by searching for Teddy Bear Hunt – Taverham, Drayton and Thorpe Marriott on Facebook.

Detectives are appealing for information following the theft of a car in Norwich over the weekend.

The incident occurred sometime between 5am and 5.30am on Saturday 21 November on Kingswood Avenue, Thorpe Marriott. Suspect(s) stole the keys to a Grey Audi A4 convertible from an address before driving the car away.
The Audi was found abandoned at around 9am on the same day on the Sweetbriar industrial estate with front end damage.

Police would like to hear from anybody who may have seen the vehicle being driven around. It is likely the Audi was driven erratically and involved in a collision during the early hours of Saturday morning.

Anyone who may have any information about this incident or may have seen anyone acting suspiciously in the area between the times stated should contact police DC Esther Dunn at Bethel Street Police Station on 101 or call Crimestoppers anonymously on 0800 555111.

An incident involving a drink driver has left Thorpe Marriott residents Lyn and Mike Howes shaken and concerned about the speed of cars travelling along Drewray Drive.

At around 3pm on Wednesday, February 4 a female driver came off the road and ploughed into their mature garden on the corner of Priorswood, taking out plants, bushes and snapping a substantial tree in half.

The incident happened while Mike was unwell and in bed at the back of the house.

“Mike is hard of hearing, but he heard a thud and assumed it was me coming back from work,” explained Lyn. “We now realise this must have been the noise of the car hitting the tree.

A neighbour from across the street saw the whole thing and called Lyn, who works as a community support worker, to tell her to come home.

They told Lyn how the car had come up the curb and clipped the next door neighbour’s garage and then careered across the garden into the tree. The driver then tried to make their escape by driving over a waist-height hedge. Fortunately, debris from the hedge forced them to stop halfway up the road and try to remove them, by which time the neighbour, who wishes to remain anonymous, was able to run after them, get hold of the car keys and call the police.

“We were so lucky that they clipped the neighbours garage, as otherwise they would have gone straight into our lounge,” said Lyn, who has lived there for eight years. “The tyre tracks show that they were just inches away from the window.

“Luckily I was only in Hellesdon when I got the call from my neighbour and was able to come straight home.

“The garden was a complete mess, with mud and branches everywhere. The tree, which was as tall as the house, was gone.

“My mind was everywhere but I just kept thinking what if Mike had been out there, because he wouldn’t have heard her coming. She is so lucky no one was walking there, especially as it was around the time when children are walking home from school.”

The police arrived on the scene quickly following the neighbour’s call and the driver was arrested following a positive breathalyser test.

“Naturally we are shocked and upset at what has happened, but our main reason for highlighting this is that hopefully something will finally get done after years of people complaining about speeding through Drewray Drive,” added Lyn.

“There are lots of traffic calming measures on Kingswood Avenue and Pendlesham Rise, but none on Drewray Drive or Long Dale.”

A Norfolk County Council spokesman commented: “Traffic calming can be useful on residential streets, but it’s not universally popular, particularly on roads like this – a main route into an estate. And, with public money under so much pressure, we are having to target our spending on places where people have been killed or serious injured.
“We would also like to highlight that drinking and driving is one of the most dangerous things drivers can do. It puts their own lives and safety – and that of other road around them – at huge risk, no matter what the surrounding traffic measures might be.”

Lyn and Mike, who enjoy gardening and work hard to keep it tidy, are now in the process of getting quotes from a landscape gardener to pass on to their home insurance company. They are hopeful that the driver’s insurance will cover restoring their garden and are anticipating a long drawn out process before it is finally back to its former glory.

Norfolk Police have released the following statement: “Louise Chitty, a 41-year-old woman from Pyehurn Mews in Taverham, has been charged with driving a vehicle when over the legal alcohol limit, in connection with an incident on Drewray Drive in Thorpe Marriott on Wednesday 4 February. She has been bailed to appear at Norwich Magistrates Court on Thursday 19 February.” 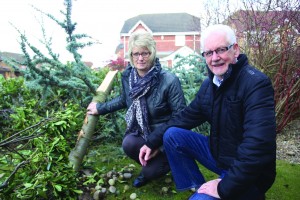 Lyn and Mike Howes.
PICTURE: Smile for Me Photography