A comedy play which has received high praise will be performed by a professional touring company in Drayton later this month.

The curtain goes up on Searchlight Theatre’s production of Would You Adam and Eve It? at Drayton Hall on June 22 at 7.15pm.

The plot shows what happens when two men dramatise all 90 chapters from the first two books of the Bible.

With a few strategic speedy bits to help it achieve a 90 minute running time, the show has entertained audiences around the world for the past nine years, including the Edinburgh Fringe Festival where it received five-star reviews last year.

The performance is being hosted by the Together Loving Christ Church. It is described as suitable for children aged nine and above. Tickets cost £10 and can be bought from the theatre company online: www.searchlighttheatre.org or special offer tickets, costing £8 each, can be bought by contacting kiera@tlcnorwich.church or ring 0777 8065 639. The church is subsidising the cost. 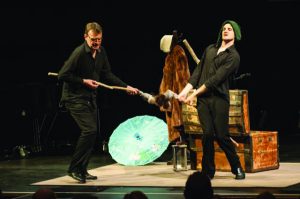 A scene from the play