A popular area of woodland in Sprowston has won an award for its biodiversity.
Harrison’s Wood, which borders Blue Boar Lane and Salhouse Road was opened to the public in May and was given the award by the Norfolk Biodiversity Partnership.
Accepting the award, town council chairman Ian Moncur said there were big plans in store for the plot, saying: “This is just the start.
“We intend to increase involvement of community groups so that we can manage the woodland and realise our ambitions which include the bridging over of the existing ditch, provision of a car park and maintaining and improving the habitats of the woodland as a priority for conservation.” Public access to the 27-hectares of mixed woodland was made possible through a partnership of the town council with Broadland District Council and the Norwich Fringe Project.
The wood features a network of paths through mixed evergreen and broadleaf trees including oak, rowan, silver birch and scots pine and is home to birds such as chiffchaffs, treecreepers and great spotted woodpeckers.
David Willmott, Broadland District Council’s member champion for community engagement, added: “This is a great project and we were pleased to work with our partners to create a community asset which we hope residents will enjoy for generations to come.” 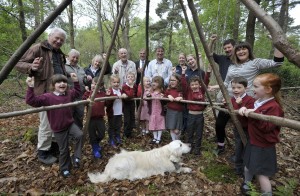 Children from Cecil Gowing Infant School, councillors from Broadland
District Council and Sprowston Town Council and the Norwich Fringe Project
at the opening of Harrison’s Wood.

Taverham Mill Nature Reserve will be holding its annual open day on Saturday between 10am and 4pm.
Across the day there will be screen printing on the front lawn with a portable print studio coming from London to get involved in some wildlife inspired printing. The RSPB will also be offering information on how to give nature a home in our gardens and urban areas. Wild Touch Animal Sanctuary will be along to show children and adults the variety of animals they care for.
Various food and craft stalls will also be on the front lawn and the entire day is free of charge.