Stonemason Paul Miles has pledged to clean and repair Drayton War Memorial for free, in tribute to those who gave their lives in the First World War.

Drayton Parish Council contacted several stonemasons, including Paul, and asked them to tender for the work.

Paul, who lives in Taverham and has a workshop in Drayton, said: “I just said if they liked I would do it free of charge as a gift to Drayton.

“Those soldiers were mostly youngsters who thought they were off on a jolly holiday. They gave so much for us. They are all heroes.”

Paul has already cleaned the memorial and will ensure that any missing lettering is replaced and all letters painted in fresh black enamel in time for The Armistice centenary weekend.

He added: “Having received quotes for hundreds of pounds for cleaning the war memorial, the parish council was delighted to take up Paul’s very generous offer. We know his work will be appreciated by all those in the parish and this is a lovely gesture to honour those who gave their lives for their country.”

An Armistice Commemoration Afternoon Tea will start a weekend of events in Drayton to mark the centenary of the end of the First World War.

The parish council, village hall committee and parish church are working closely together on the programme, which will also include a church service featuring poignant silhouettes of Drayton’s war dead from the 1914-1918 conflict.

The tea will be held in the village hall on Saturday November 10. Doors open at 2.15pm for a 2.30pm start. The afternoon, sponsored by the parish council, will include musical entertainment from accordionist Alan Sisson, as well as period poetry and a community commemoration.

Tickets cost £3.50 each (phone 01603 867987) including tea/coffee and light refreshments. All proceeds will go to Drayton Village Hall.

On Armistice Day, Sunday November 11, St Margaret’s Church, Drayton, will hold a service at 10.30am when the congregation will be joined in the pews by Perspex silhouettes of soldiers, representing each of the nine men whose names are recorded on the churchyard memorial,

The shapes, part of the national There but not there commemoration, are sponsored by the parish council. Pen portraits of each man will also be read and displayed.

After the service, refreshments will be served in the village hall, opposite the church, with catering provided by The Partea Hut.

All are welcome at the weekend events and organisers hope people will bring along any First World War memorabilia passed down through their families. 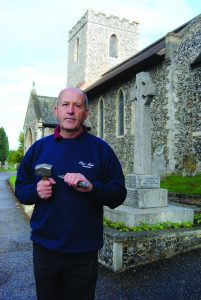 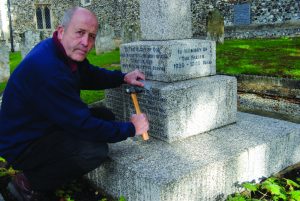 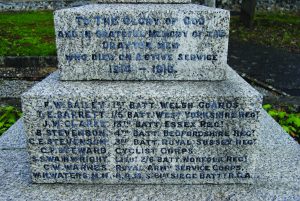