The Children’s Touring Partnership took to the stage in Norwich last night with Running Wild, an adaption by Samuel Adamson of the Michael Morpurgo book of the same name.
This was a feast for the eyes, ears and emotions. Laughter, sadness and at times fear are felt through the scary rainforest adventure of of nine-year-old Lilly. The story has a serious message of both animal conservation and relationships and love, between humans and animals – elephant Oona, who is puppeteered by four people,  orangutans, a tiger, a crocodile and rainforest birds.
The audience is totally immersed into the sights and sounds of the Indonesian rainforest. The clever set design and lighting along with the sound effects add to the experience. The physical theatre skills of all the puppeteers was pure genius. You literally watch them breathe life into the puppets… they actually come to life before your eyes. I became so invested that I no longer saw the puppeteers.

The movements, motion and animal sounds are created by the cast and you just know that they must have spent hours watching and researching real animals in order to recreate and mimic.

A special mention must go to 12-year-old Annika Whiston, who played the lead role of Lilly and rarely left the stage. She portrayed the role beautifully and with great maturity. Every emotion and relationship she had I felt, bringing me to tears, more than once, much to my own daughter’s horror.

Morpurgo was inspired to write this modern-day Jungle Book by the real-life story of Amber Owen, who was on holiday in Phuket with her mother and stepfather in 2004, and enjoying an elephant ride on the beach when the Boxing Day tsunami hit.  The elephant ran inland and saved her life. When the author read of Amber’s story, he said it was “the one bit of hope amid the destruction”.

The production will be working during the tour to support the Born Free Foundation’s global elephant conservation projects.

There has been great take up by schools with a number of performances throughout the day times but it is most definitely not just for children.
There are still tickets available, if you have not seen it then I urge you to make the time. I promise you will not be disappointed. It will make you laugh and possible cry but most of all it will make you think.

A must-see piece of theatre. 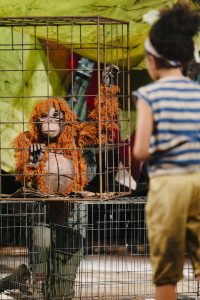 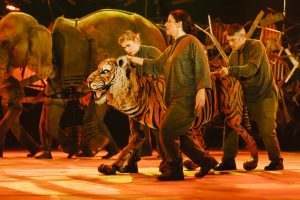