The success of Aylsham High’s nurture group has been recognised for its work with a national quality award.

The team behind the Eagles at the school was presented with Marjorie Boxall Quality Mark Award by Helen Stollery, head of quality and standards for the organisation.

She visited the school in December to see how the nurture group worked with students to help build confidence among the students.

Majorie Boxall was and educational psychologist who started nurture groups in the later 1960s. She saw children starting school without the inner resources to cope and how they became difficult, often ben sent to “special” schools.

Helen said: “There is a strict set of standards nurture groups have to meet to be awarded this quality mark, as well as the school, and we also measure the social, emotional and educational impact.”

At the end of her report, Helen stated there was a “warm and genuine affection” within the group which “encouraged the relationship between staff and children to flourish”.

There have been 140 students through the Eagles since it was set up nine years ago. And 40 schools from all over the country have been to see the group in action, with the aim to introduce something similar in their own.

Head of nurture Danny Sweatman proudly received the award along with his team. “I feel incredibly lucky to work here,” he said. “It’s incredible to be part of the school and this community.”

Head Duncan Spalding said: “It’s a feather in our cap. The Eagles are integral to what we do and what makes us special.”

The Eagles can be summed up, however, with comments from the students, who have said: “They have the magic touch”, “teachers always listen” and that the group is like “heaven on earth”. 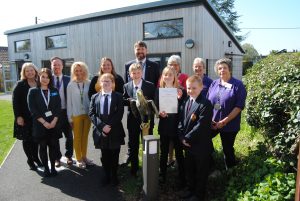