A shortage of food and lack of hygiene have been highlighted as problems at St Michael’s Court care home as it received an “inadequate” rating from Care Quality Commission inspectors.

In a report published yesterday (January 22) staff during the inspection in December, said residents were being left in undignified conditions, in urine and faeces at night, uncovered and not
receiving personal care such as washing, when needed.

The inspection on December 12 and 14 was unannounced and prompted in part by complaints and concerns from members of the public.

The care home has capacity for 86 people, some of whom are living with dementia. At the time of the inspection 71 people were living within the home. Inspectors spoke with 15 people living in the home, eight visiting relatives, 12 staff members including the manager, the deputy manager, the residential services manager, an agency care worker, three team leaders, three care assistants, a regional manager and a quality director. There was not a registered manager in post at the time of this inspection.

The home’s last comprehensive inspection was carried out in August 2017 and was found to be “good” overall.

But the latest report stated: “At this inspection we found that the service had deteriorated with widespread serious concerns and was rated ‘inadequate’ in all areas. The service was not safe. People were not adequately safeguarded from the risk of abuse and staff did not have thorough knowledge of safeguarding procedures.”

For example, the report said that staff had photographed skin tears on three recent occasions, on two people, which had been inflicted by one person on another. “This had not been acted upon and reviewed in the care plan and risk assessments for the person who inflicted harm. The incidents had not been referred to the safeguarding authorities.”

One person had a serious pressure ulcer and required support to reposition every hour. According to their records, on one occasion they were left for almost five hours.

There were also concerns about infection control. The report stated: “In one bedroom the toilet contained a commode, but the inside had not been cleaned properly, with faeces smeared on the side and base. On our second inspection visit, we found that there were faeces on the floor in a person’s en-suite. Some people had dirty pillows, sheets and bed bumpers in their bedrooms. In one case, a dirty sheet had been put back in a drawer with the person’s clean laundry. Some people had razors in their bathroom cabinets that were clearly old and dirty. Wheelchairs were dirty and some chairs in communal areas smelt of urine.”

Care staff said the home had regularly run out of food and drink items. One staff member said they felt it affected people’s drinking sometimes, as there was only water available to drink because juice or squash had run out.

One staff member said: “The lack of food is insane, we’ve gone through numerous chefs, there was never enough food. People got fed but it was whatever we had to make it go around, we reported it, nothing happened. Apparently, this is because of budget.”

There was normally not a vegetarian option available. They also gave an example of 26 people having five pasties and four mini pizzas for tea. Another staff member said: “There have been times where we had no milk, no marmalade, no juice.”

People’s privacy, dignity and right to confidentiality was not always upheld. One relative told inspectors they it had been necessary for them to tell their family member to go to the toilet in their incontinence pad because there were no staff available to take them to the toilet.

There were also issues with lack of activities at the home: One person said: “I have not been offered any exercises or activities in the care home.” Another said: “I am lucky because I can go out but I do get bored here, there isn’t a lot going on.”

Topical medicines such as creams for skin care were not administered or recorded as prescribed and some were out of date. Some bottled items were not dated and in one areas of the home, stocks of oral tablets did not add up correctly which meant that people may not have received their medicines correctly. People were left unattended and uncomfortable for long periods of time. And could not get assistance when needed.
Services in special measures will be kept under review and will be inspected again within six months.

The report said: “The expectation is that providers found to have been providing inadequate care should have made significant improvements within this timeframe. If not enough improvement is made within this timeframe so that there is still a rating of inadequate for any key question or overall, we will take action in line with our enforcement procedures to begin the process of preventing the provider from operating.”

A spokesperson for Runwood Homes, which manages St Michael’s Court, sent us this statement:

St Michael’s Court was previously rated as a good home with the CQC in 2017. In late 2018 there were management changes and new management did not continue to provide the level of service we expect and standards within the home were not maintained.

I am pleased to say that there is new, experience management in situ and the home is working diligently to ensure that its residents receive the high level of care that they deserve.

Residents and families can be assured that we are dedicated to providing a quality service and are working hard to get full compliance with the CQC.

As an organisation, we strive only for the highest standards of care and monitor our services very closely to ensure care delivery is person centred and meaningful to all who live in our homes. Our residents’ wellbeing is our number one priority.

It is only ever with the best interests of our residents that we undertake to improve and learn from any shortcomings experienced. 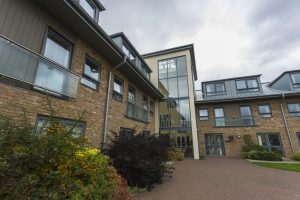