Miniature trains will run during the afternoon of Monday August 27, with all fare revenue being donated to the Lord Mayor councillor Martin Schmierer’s chosen charity, The Feed Foundation.

Local steam, electric and internal combustion locos will be present and it is hoped that visiting locos will attend.

The railway already holds a popular Children in Need Day at the end of the season and the Lord Mayor’s Fund Day has now also become a regular fixture.

Trains will be running from 1pm until 5pm and will operate every few minutes, weather permitting.

The Lord Mayor will open the proceedings at 1pm at Parkside Station on the mainline track.  Park visitors are invited to bring a picnic and watch the trains go by.

The Lord Mayor’s charity will also have a publicity stall outside the miniature railway station.

In the event of foul weather, alternative arrangements will be made.

Below: a scene from last year’s event. 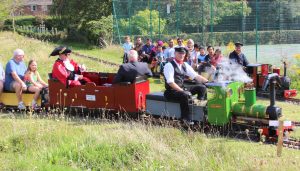