A 12-year-old Cromer girl will be singing on stage next month at Norwich Theatre Royal with English Touring Opera in the opera Iphigénie en Tauride.

Charlotte Pollard, who lives in Norwich Road and attends Norwich School, is a chorister in the Girls Cathedral Choir and also sings in the National Youth Choir of Great Britain. Her choirmaster at Norwich School put her name forward for the role of the goddess Diana in Iphigénie en Tauride.

The youngster has previously been Brigitta in the Sound of Music for the Cromer and Sheringham Operatic and Dramatic Society and recently sang at the Royal Festival Hall with Norwich School. She sings at Evensong in the cathedral every Tuesday with the girls’ choir.

Rehearsals with English Touring Opera start this Sunday (Feb 21) at Bermondsey with the other young Dianas from other venues around the country.

She will be required to perform five minutes of recitative on stage in full costume as part of the production. Her solo comes at the end of the show.

Explaining how he came up with the idea of casting children to play the part of the Goddess Diana, director James Conway said: “I chose to cast her as a child because her character has the innocent wilfulness of a young person who acts on instincts, and people obey her for it. There was also the tricky decision of how to differentiate between gods and humans on stage, and casting a child highlights this in an effective way.”

Charlotte said: “I feel really honoured to have been given the opportunity to sing with English Touring Opera. I think I will be a little nervous on stage, but I’m sure I will be OK although I will be trying to remember everything I’ve been taught and remembering the words as I will be singing in French. I would definitely like to train as a classical or opera singer.”

Charlotte started having singing lessons at the age of seven and has now reached Grade 7. She is in the National Youth Choir of Great Britain, in the junior girls section which is drawn from the whole of the UK.

She got a singing scholarship to Norwich School and is a girls chorister. They rehearse every Saturday and sing every Tuesday. She will also be singing in the St John’s Passion in the cathedral on March 20.

To book tickets go to www.theatreroyalnorwich.co.uk 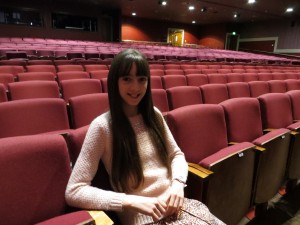