Two stars from the West End hit musical 42nd Street have given the cast of Aylsham High School’s own production a tap dancing masterclass.

Adam Denman and Becky Herszenhorn spent a whole afternoon with about 25 members of the cast, going through complex tap routines and giving their choreography some extra pizazz.

The show is pulling in massive audiences in London after opening in the West End in October. And by coincidence, Aylsham High School bought the rights to perform the show. The cast has been perfecting its tap dancing since September and youngsters managed to wow the two stars from the West End during the coaching session.

Adam said: “I didn’t expect this calibre of skill. They are absolutely fantastic.” Becky added: “We found out today some of them had never worn a pair off tap shoes before rehearsals. Hopefully we have been able to pass on some of then energy and excitement of the West End show.”

Adam and Becky spent three hours working with the students, making sure the split-econd timings were spot on and that Aylsham’s stars hadevery bit as much glitz as their professional counterparts in London. When the show opens in Aylsham there will be a cast of 40 plus a professional orchestra.

42nd Street is a musical about a musical, the cast of a show battling against the odds to put on a hit. It’s packed with famous numbers such as We’re in the Money, Lullaby of Broadway and, of course, the big hit number 42nd Street.

Director and Aylsham High drama teacher Hazel Martin said: “To have two stars from 42nd Street in the West End come all the way out to Aylsham to help us perfect our show has been a really amazing experience for all of us, our cast have been buzzing with excitement. Adam and Becky have been wonderful, they’ve really helped us raise our game to new heights.”

Producer Tanya Wiseman has worked tirelessly to get the sets built and arranged for Becky and Adam to come to Aylsham for the coaching session. She said: “I’m so immensely proud to see the students achieving those extra finishing touches and can’t wait for opening night.”

42nd Street at Aylsham High School runs from March 14-17. Tickets from the school or Ticketsource.co.uk 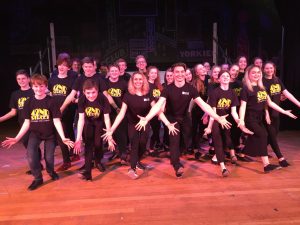