Itteringham village shop has been saved from closure by North Norfolk District Council.

The future of the the community shop had been uncertain because its current owners had served notice on the Itteringham Community Association (ICA) to terminate the lease. The notice expires on October 8.

But at today’s NNDC Cabinet meeting, a proposal to buy the shop and the adjoining Fair Meadow House was approved.

The purchase for an undisclosed amount means the shop will stay in its current location and will be leased to the ICA.

The decision has be greeted with delight by those associated with the shop who were at the meeting to hear the decision. Around a dozen volunteers and staff are involved in its running.

Back at the shop, staff member Alice Ridgeway said: “It’s wonderful news that NNDC has agreed to buy the shop. It’s is so much more than just a shop, it’s a lifeline for many people.”

She thanked the council and all the supporters who had been behind the campaign to keep it open, saying: “It’s really lovely that so many people care about the shop and its future.”

Tom FitzPatrick, leader of North Norfolk District Council, said: “This is an important community asset and it is fantastic that its future has been secured. There was a huge desire locally and further afield to see this shop saved. We are delighted to have helped achieve this for Itteringham and for the remarkable and dedicated community group which runs the shop.”

The ICA has successfully run the shop for 25 years and there is potential to expand the shop and café, subject to any necessary planning consent, into the currently unused gallery space. 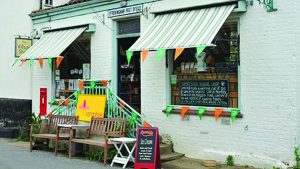 Schoolchildren, a community choir and its audiences, an archives group dedicated to charting the history of a Norfolk town and a group working towards updating play equipment were among those to benefit from the latest handouts from the Worstead Festival charity.

The charity has a long history of helping groups and organisations both in its villages and in neighbouring parishes.

Thanks to the small and dedicated group of volunteers who organise the July event, this year the organisation handed out grants totaling £16,000-plus at its annual meeting on December 7 at Worstead Village Hall.

Those to benefit were Worstead Primary School, The Choir Worstead, North Walsham Archives group, North Walsham Play, Worstead Guild of Weavers (for toilets at their HQ) and Scottow Church (for church heaters). Money left over will remain in the funding pot.

Chairman Simon Cole said: “The effort that goes into the festival over the course of the entire year is all worthwhile when we get to give these grants to groups who are doing so much good for their communities.

“The 2016 festival was a particularly good one, with some new ideas working well and our visitors responding very positively to the whole event.

“Plans for 2017 are well in train and we look forward to welcoming both regulars and those who have not come to see the festival before.”

Matthew Smith, from North Walsham Play, which received £2,500, said: “The very generous donation has enabled us to start putting plans together to bring about the new play park in the new year. The donation means a lot of all members of the committee and we would all like to personally thank everyone involved with organising such a well-loved and well-supported festival.”

Wayne Beauchamp, from North Walsham Archives echoed that sentiment, saying: “Thanks to the awesome Worstead Festival committee for donating £500 to our group, The North Walsham and District Community Archive, to help with our work archiving the area’s history. This will help enormously. We plan to buy storage equipment for keeping our massive collection of photos and documents safely stored, both digitally and physically, and also a new portable scanner to aid in digitising photos ‘on location’.”

The annual meeting included the election of directors for the year, with six standing again and one new member joining.

Next year’s event will be held over the weekend of July 29 and 30. Grant applications open in March and close at the end of September for the amounts to be agreed in time for the 2017 AGM at the beginning of December.

The UK’s national parks are calling for nominations for their annual UK National Parks Volunteer Awards. The awards enable the parks to thank volunteers for the thousands of hours of service, effort and dedication they contribute every year, helping to make the national parks Britain’s most treasured landscapes.

“The Volunteer Awards are always one of the highlights of our calendar,” said Kathryn Cook, National Parks UK Director. “We love the awards because they give us an opportunity to showcase our amazing volunteer force and all the tremendous work they put in across the 15 national parks. Help us to find our national park heroes and give them the recognition that they deserve.”

The awards recognise the hard work of volunteers deemed to have gone above and beyond the usual expectations of volunteer service. Beth Williams, volunteer coordinator for the Broads Authority, which is a member of the national park family, said: “Many of our projects would be impossible to undertake without the dedication of our volunteers. So please help them to receive national acclaim through these prestigious awards.”

In 2014, the group award went to the Nancy Oldfield Trust at Neatishead, which offers disabled and socially disadvantaged people the chance to go boating on the Broads. Volunteers take visitors sailing, motor boating and canoeing, and fishing and birdwatching are also available.

To nominate a deserving individual, young person, group, or project for 2016, visit: www.nationalparks.gov.uk/volunteerawards

More information on the awards, including FAQs and terms and conditions can be found at the same URL.

The volunteer service or project must take place within the boundaries of one of the UK’s 15 national parks, but nominees need not be volunteering for a UK national park.

A shortlist of nominees will be released in October and the winners will be announced in November.

To find out more about the work that volunteers do in the Broads, as well as how to volunteer yourself, visit: 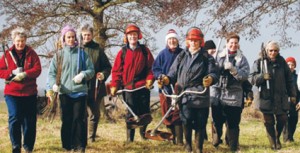 On the evening that England lost to Iceland and dropped out of the Euros, more than 110 people gathered at Cromer beach in a photo that definitely does give us something to be proud of!
This North Norfolk emergency services and lifesavers photo was taken by Chris Taylor and organised by RNLI lifeguard manager Vincent Pank.
The photo features (amongst others) representatives from RNLI Lifeguards, Sheringham RNLI, Cromer RNLI, RNLI Face to Face team, HM Coastguard teams, Norfolk Police, Norfolk Fire Service, East Anglian Air Ambulance, East of England Ambulance Service & Broads Beat.
A large high res. version of the image is available from https://www.dropbox.com/sh/aobe6jjo1tkd84m/AACy2hXR-0_5cMQQTbMhSS06a?dl=0

There a chance to bring some colour into the lives of cancer patients as Big C launches its first ever Colour 5K fun run at Hoveton Hall Estate.
It doesn’t matter if you have never run before, the idea is to get into the outdoors and have some fun, walking or running around the woodland course and support Big C. It is not a speed trial or race. Colour bandits blast different colours of paint at every 1km interval to transform white T-shirt wearing participants into individual moving works of art and encourage them on their way.
The route is off-road on a woodland trail, promising glimpses of the Repton-designed Hoveton Hall between the trees. There’s even a special separate 1km course for little legs aged over six who will run their race first at midday.
Spaces are limited and with just four weeks to go, prospective participants need to act fast.
There will be plenty of family entertainment throughout the day so runners are urged to arrive early to collect their free Colour 5k T-shirts, Big C headbands and goody bags. Warm ups for both distances begin at least 15 minutes before the start.
Face-painting, rodeo bull, bouncy castle, hot and cold local food and drink stands, outdoor games for children are among the attractions. Each vendor is also donating 10% of its profits to Big C.
Big C events manager Dan Bell said: “It’s not too late to get into training. If you’ve never entered a sponsored run before, this is your perfect entry as 5k is an achievable target for beginner runners. The colourful paint extravaganza at the finish line is the perfect opportunity to celebrate your achievement in style.”
Rachel Buxton of Hoveton Hall said: “We are delighted to welcome back the Colour 5K. This event is fabulous fun, the atmosphere is always one of great anticipation and it lovely to see whole families get involved to help raise money for such a worthwhile charity as the Big C.”
First time runner currently in week three of training for the Colour 5K is Big C’s PR Consultant Stephanie Renouf. “Week after week I write stories about amazing and selfless people of all ages and walks of life who have lost family members to cancer and undertaken incredible challenges in their memory. I felt it was time that I signed up and got out of my comfort zone.  I never run for anything except a bus or train or if the village shop is about to close and I need to buy supper.”
Colour 5k run is going ahead at Hoveton Hall on Saturday (July 9). Gates and registration open at 10am. Individual tickets cost £22, under 16s £16, kids fun run £10, family ticket £60.
To register in advance and for more details visit www.big-c.co.uk/colour5k 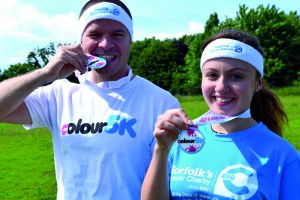 Events Manager Dan Bell and fundraising administrator Lauren Self with sweatbands and medals given to all participants in the Big C Colour 5K.jpg

Volunteers are being sought for this year’s Cromer Carnival. If you fancy helping out and joining the team make your way to the Carnival’s Helper’s Night to find out more. END_OF_DOCUMENT_TOKEN_TO_BE_REPLACED