BBC One’s Antiques Roadshow – regularly watched by six million people on Sunday evenings – will be filmed on Cromer Pier and promenade in May.

It will be the first time ever the show has been filmed on a pier.  Antiques Roadshow, one of BBC One’s most popular programmes, attracts an average of 3,000 to 4,000 visitors, spread through a full day.

The event, on May 24, will boost local business, increase footfall in the town in the week before half term and put the North Norfolk District Council-owned Cromer Pier on the international television stage.

Council leader Tom FitzPatrick said: “The wonderful asset that is North Norfolk District Council’s Cromer Pier will be on show to the world through the screens of one of the BBC’s leading television programmes.

“We look forward to hosting an exceptional event in May and seeing the finished product on our television screens later in the year.”

Maggie Prior, cabinet member for leisure and culture, said: “It will be most interesting to see what local treasures are brought along and how many may be linked to our coastal or seaside history. What a treat this will be for the residents of North Norfolk!”

Rory Holburn, director and partner at Openwide, which recently won a new 10-year management contract to run Cromer Pier, said: “Openwide are thrilled to be part of the team hosting The Antiques Roadshow in a joint celebration of the best of our heritage.”

Robert Murphy, series producer of Antiques Roadshow, said: “It’s the first time the Roadshow has been to a pier and we’re looking forward to entertaining our visitors by the seaside and along the promenade. It promises to be an entertaining day out at the start of the summer and we’re looking forward to seeing cherished objects and hearing personal stories – make a day of it!” 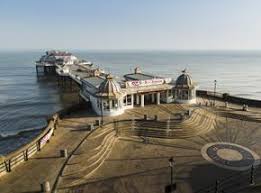