A trio of surfing life-saving buddies have teamed up to take on a fundraising challenge in memory of one member who sadly died.
One of the team is Jess Frere-Smith, whose dad Adam, known fondly as Papa A, passed away in November.
She will be joined by Juli Kett-Brodie and Jo Thompson to complete the Half Ironman at Holkham on July 3 to raise money for the North Norfolk Surf Lifesaving Club .
“My dad was a massive part of the club for years and we want to do this in his memory,” said Jess.
She said Jo had been the first to sign up for the challenge and mentioned it to the other two.
Jess said: “Juli was up for doing it as she has a big birthday this year but she was not sure she’d manage the swim part. I have always been a swimmer, I used to compete until I was 16, but I haven’t swum properly for three years now as I’m struggling with an ongoing shoulder injury.”
Luckily Juli is helping as she is a sports therapist. “I’ve been seeing Juli for treatment and really improving, so I agreed that the swim part was something for me to aim for and my dad is my motivation. So Juli and I are doing it as a team. We then decided it would be great fun for us to race against Jo as we are all part of the club.”
All money raised will go straight into the club to buy kit and keep it running.
Jess has been with the Cromer-based club for about eight years. “My dad used to bring me and my brothers down when it first started up and was little more than a few people and a few boards.
“I think the club is great for young people as it teaches them water safety, first aid and life saving skills as well as allowing them to be part of team of all ages and abilities whilst getting them outside training and keeping fit. Being with the club for so long, it’s such a great feeling seeing some of younger members progress and then go on to work as lifeguards.”
Jess and her family held a memorial at the clubhouse and beach for Adam on May 28, an emotional time for those who attended.
The day included a paddle out into the sea to scatter his ashes and the unveiling of a memorial plaque and chair.
“We then stayed on the beach until dark having a barbecue,” said Jess. “It’s how dad used to love spending his evenings in the summer.”
The girls would welcome any support in sponsorship and all the details can be found on their Just Giving page. 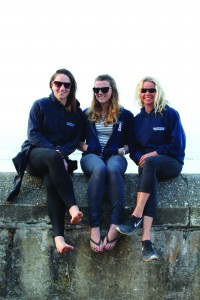