Police believe the body of the young man found this morning near North Walsham was that of missing 20-year-old Ian Tang.

The body was found in an area of woodland at Swafield at 11.15am by a small group who had joined around 200 members of the community, the Fire and Rescue Service and Lowland Rescue in the search at 10am this morning.

Ian went missing after leaving Club KA in North Walsham at 2.30am after spending the evening with friends. CCTV in the town shows him alone, walking towards the B1145. He was sighted later near the bypass and was last seen between 5.45 and 6am near the Pigney’s Wood/Swafield area by a passing motorist.

At a briefing at North Walsham police station this afternoon, Wes Hornigold, Chief Inspector for North Norfolk and Broadland, said they had yet to officially identify the body but were working closely and supporting the family while this was carried out.

And he praised the huge community effort which had aided the search. “It was absolutely fantastic to see such a real community effort, people really came out in force, giving up their time to help. It was a testament to the community spirit of North Walsham. I was overcome with the amount of people who came to North Walsham police station this morning.”

Members of the community had also been out the evening before searching in the dark.

He said Ian was obviously well-liked within the community and said: “Our thoughts are with the family at this time.”

He said a formal identification was expected today or tomorrow and the investigation would continue to piece together what happened, though Ian’s death was not being treated as suspicious at this time.

Police and volunteers had carried out door-to-door inquiries and posters had been put up in the town. An appeal had also gone out on Facebook asking for help in the search.

Ian worked at Rossis Leisure in North Walsham as well as attending college. Fitness classes at Rossis were this afternoon suspended out of respect to him. Operations manager Chris Carr said the staff were coming to terms with the tragedy. “Ian was a well-liked member of the team and many staff here were very close to him. Our thoughts are with his family and friends,” he said. 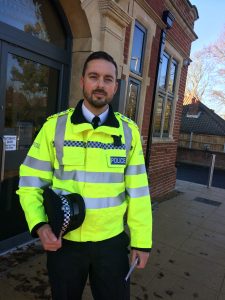