Using a smartphone during a church service? It’s no longer a cardinal sin in Aylsham where Sunday (November 25) morning’s congregation will be encouraged to look at their screens and send messages as they sit in the pews.

Rev Canon Andrew Beane will be using the latest Swedish technology at the 10.15am service to find out what his parishioners think.

As churchgoers arrive at St Michael’s parish church they will be able to download a free app and enter a code displayed on a screen.

During the service Canon Beane will be asking various questions and, by pressing buttons on their smartphones, the congregation’s answers will be almost-instantly recorded and displayed for all to see, for example in the form of numbers and bar charts.

The “interactive presentation platform” is called Mentimeter and is widely used in business boardrooms but is a rarity in British churches.

Nicholas Baines, a spokesman for Mentimeter, said: “It’s breaking the taboo of using phones in church. I believe Andrew might be talking about perceptions of Advent and his questions will be around that theme. Depending on people’s answers, he might adapt his sermon. It allows him to interact with his congregation virtually instantly.” 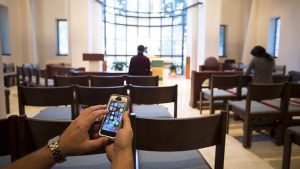