More than 100 guests helped celebrate the first anniversary of the opening of the International Aviation Academy, on the Norwich Airport industrial estate, a stone’s throw from the airport terminal in Hellesdon.

And academy chiefs want curious Hellesdon residents to know that the academy is open to the public during the week.

Keynote speakers included Norwich North MP Chloe Smith who has, since 2016, supported a seven-point aviation skills manifesto, developed by the Aviation Skills Partnership (ASP), which the partnership used to get the academy project off the ground.

Although the academy has been open for a year, and is already used by hundreds of students, many local people are still unaware of its existence – or the fact that it is open to the public.

Designed from the outset to inspire people into the world of aviation, the building is actually a World War Two aircraft hangar, which has been transformed into a revolutionary learning environment.

The atrium, with its giant TV screen, displays of aircraft engines, models and aviation art, along with the SkyLounge Café, is open to the public from Monday to Friday.

The cornerstone of the academy concept, and what makes it unique, is that practical and academic learning are based in the same place – the academy houses a complete, fully-functional, Boeing 737 airliner.

In the near future further partnerships with training providers and aviation businesses will see more aviation opportunities for students – not just in engineering.

The culmination of the anniversary event was the cutting of a cake made especially by the academy’s own Norse Catering SkyLounge team. 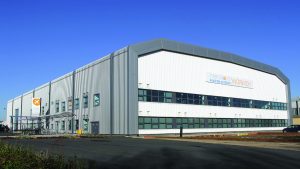 Primary schools all over Norfolk will be bringing colour to the lives of less fortunate youngsters with a charity effort through Inspired Youth.

The group is staging a Pudsey Challenge from November 13-17 in 10 primary schools across North, South, East and, West Norfolk as well as hosting an event in central Norwich.

It is estimated 300 Year 2 students will be taking part in the two-hour sessions which will involve decorating 100 Pudsey Bears.

She said: “We are looking for 100 business people to give an hour of their time to come to the schools and help support the decorating of the bears.”

There’s also the chance for businesses to sponsor the events for £50 and have their name added to a giant Inspired Youth cog from its logo or to donate pens, glitter and the like for the events.

The bears are A1 size and three children plus a business helper will be assigned to decorate each bear using arts and crafts. There will be special prize for the best bear awarded on Friday.

To pledge an hour of support email Admin@inspired-youth.co.uk. Also use that email if you have items to donate for decorating the berars/ 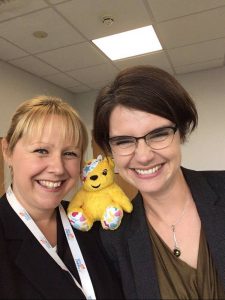 Norwich North MP Chloe Smith is supporting the event. She is pictured her with Inspired Youth CEO Natalie Davies