There will be a public meeting at Aylsham’s Paupers’ Graveyard on Wednesday May 8 at 6pm when Aylsham Town Council and volunteers will present their plans for transforming the derelict half-acre site into a peaceful environment appropriate for all. The site is between Mill Close and Sapwell Close, behind the old St Michael’s workhouse. The entrance gates are in Mill Close. If the weather is unsuitable for an outdoor meeting then it will be held in the ACT Centre, on St Michael’s Avenue. Anyone unable to attend but who wishes to make comments should contact town clerk Sue Lake on 01263 733354 or townclerk@aylsham-tc.gov.uk

Aylsham Market Place will be packed with family fun and games this Sunday morning, June 24.

The Hare-Raising Sunday action is centred on Humphry Hare, the town’s very-own GoGoHare, who will be officially unveiled at 9am outside Barnwell’s newsagent, where the town Christmas tree usually stands.

Humphry’s unveiling will be the cue for the fun to begin, lasting until midday. It includes a giant skittle alley, children’s crafts and games, a teddy tombola, card game, Aylsham Gym activities, face painting and a Hare and Snail race where everyone can place small change on the line beside either an ornamental hare or snail who will then race along a marked course. The Royal British Legion (RBL) will also be running a pop-up Poppy Shop selling RBL merchandise.

At 9.30am Aylsham High School’s drama group will sing, followed by Bure Valley School’s choir at 10am and the Broadland School of Dance will perform two dances at about 10.15am.

There will be Country Market tasters to sample and the chance to take part in Aylsham’s Snail Trail – finding a coloured, laminated collection of paper snails dotted around businesses in the town. Each snail bears a letter of the alphabet and all together they spell out a phrase.

All the activities are outdoors while bacon rolls and a tuck shop will be available in the town hall.

Painted by artist Lisa Kirkham, Humphry is one of 18 decorated models dotted around the county, as well as 50 in Norwich, plus 164 Norfolk leverets, forming part of this summer’s GoGoHares trail in aid of the charity Break, which supports vulnerable children and young people.

Hare-Raising Sunday has been co-ordinated by Aylsham Town Council and involves 17 different local organisations. They will be raising money for their own causes and making a donation to Break.

The entire Norfolk GoGoHares trail also launches on Sunday at 9am and the hares, including Humphry, will be in place until September 8. County-wide trail maps will be available in the Market Place. 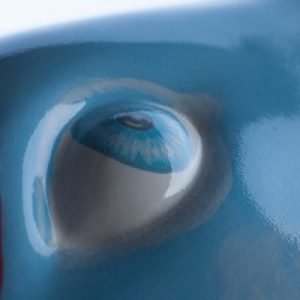 A tantalising glimpse of Humphry’s eye – the only part of him that’s been revealed so far!