A spokesman for the company said: “As a business we are not immune from the downturn on the High Street which means, regrettably, we have to take tough decisions.

“Our shop in Cromer has been making losses for some time but these have increased significantly in the past few months leading to our decision to close it, unfortunately leading to six redundancies. However, we hope some of those effected can be offered new positions within the group.”

There has been an electrical store at the premises for many years. Hughes took over from Bennetts Electrical in 2011.

Customers who have equipment on rental from Cromer are now being looked after by their North Walsham branch. 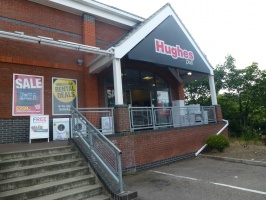 The Holt Road store which is now closed.