There are not enough words to describe this wonderful production of Sister Act by Cromer and Sheringham Operatic and Dramatic Society, which runs at Cromer Pavilion Theatre until June 2.

The opening gala night on May 26 was packed with an audience expecting the best of shows and they were rewarded with a dazzling display of talented actors and musicians.

The musical is set in Philadelphia USA in December 1978 and follows the fortunes of a nightclub singer, Deloris Van Cartier, after she witnesses her gangster boyfriend shooting one of his gang.

Deloris reports this to the police who then decide to keep their witness safe by hiding her in a convent. Deloris is played by Claire Reynolds Chandler who, with electric presence, is the raunchy, ambitious singer with a soft and vulnerable side.

Her entry into the convent and her shaking up of the nuns’ choir leads to some hilarious moments, not to mention some amazing choreography and singing.

The Mother superior, Amanda Howell, is very dignified trying to keep control of her order. Sister Mary Lazarus, Carol Beatty, and sister Mary Patrick, Selina White, are the mischievous  ringleaders of the nun’s revolution. Deloris’ love interest Eddy, Paul James, is a very sensitive cop. The most hilarious scene in the show is the song Lady in the Long Black Dress, performed by Joey, TJ and Pablo (Graham Woodrow, Neil Robertson and Robin Taylor), had the audience in tears of laughter.

The most surprising new talent that shone was Charlotte Drewell, who was Sister Mary Robert. She commanded the stage in her song and caught the heart of the show. Sister Act is a show not to be missed and you leave smiling. What more can be said. 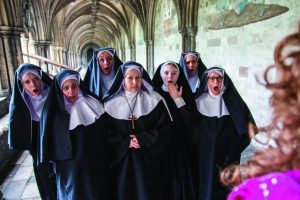 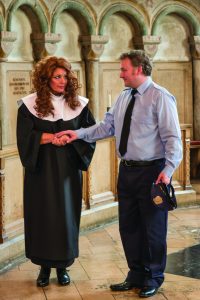