The first night of the Cromer and Sheringham Operatic and Dramatic Society (CSODS) production of We Found Love and an Exquisite Set of Porcelain Figurines Aboard the SS Farndale avenue showed off the company’s great talent.

To deliberately act badly requires a great skill which the members of CSODS managed to pull off well, although there was now and again times where the acting seemed to lose direction.

The play, by David McGillivray and Walter Zerlin Jn, is one of a series of comedy-farce plays featuring the exploits of a group of members of an amateur dramatic society and their ventures into the world of the thirties musical comedy.

The three ladies of the Farnsdale Townswomens Guild Dramatic Society, played by CSODS members Chrissie Robertson, Nona Gray, Kerry Davis and also including the very funny Nick Bird, attempt to bring the elegance, glamour and enchantment of a thirties musical to the stage.

This is a riot of a performance – collapsing scenery, a man cast as a woman, a woman cast as a man, romantic interludes between unlikely couples, a sea captain with a full beard wearing a skirt and heels, a very questionable underwater sequence and shipwreck on a tropical island. The ladies of the Farndale Avenue Dramatic Society certainly carry on regardless and rise above the terrible acting and dubious scenery to bring the thirties back to the stage.

Once again a good performance by CSODS at Sheringham Little Theatre. 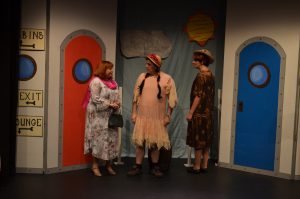 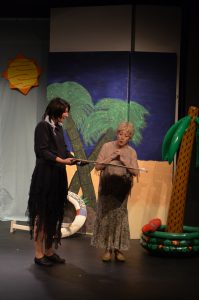