Representatives from central Norwich restaurants gathered at City College, Norwich, this week to vote for a ‘Norwich Restaurant Week’ later this year. Over 70 people attended the event which was hosted by the Norwich Business Improvement District (Norwich BID) and the Adnams Norfolk Food & Drink Festival.

After Adnams Fizz and Norfolk canapés, guests were treated to a cookery demonstration by Steve Thorpe, City College’s Head of School, before speeches by Stefan Gurney, CEO of the Norwich BID and Jayne Raffles, co-owner of Raffles Restaurants and a Norwich BID Board member.

The purpose of the evening was to gather information and garner support for a ‘Norwich Restaurant Week’ which will run during the Adnams Norfolk Food & Drink Festival in September. The Festival will celebrate its 10th anniversary this year and the city’s restaurateurs and hospitality businesses voted overwhelmingly in favour for the proposal to hold seven days of special offers, discounts, promotions and events, with exact details to be announced soon on the Festival website, www.norfolkfoodanddrinkfestival.co.uk.

Speaking at the event, which was supported by the Adnams Norwich Cellar & Kitchen Store, Stefan Gurney said: “Our aim is to encourage as many customers into the city as possible and by establishing a ‘Norwich Restaurant Week’ we plan to increase traffic to the city and boost business for Norwich BID members and beyond.” Jayne Raffles added: “From a restaurateur’s point of view, I can see clearly why a ‘Norwich Restaurant Week’ is a good idea, as by doing something collectively the city’s restaurants can really make an impact. Norfolk has some amazing restaurants and producers and the Norfolk Food & Drink Festival is a fantastic opportunity to showcase these and to show the public what we have to offer.”

Attendees at last night’s event also voted to put their special offers and promotions on to the Norwich BID’s new ‘Discover Norwich App’ which will be launched later this month. More details about the App and the Norwich BID in general are available on the Norwich BID website at: www.norwichbid.co.uk. Meanwhile, Norfolk restaurateurs and producers can find out more about getting involved in the ‘Norwich Restaurant Week’ at: www.norfolkfoodanddrinkfestival.co.uk. 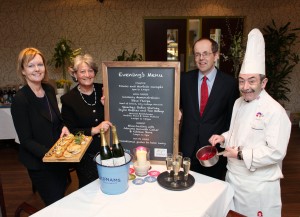