A North Walsham schoolgirl has taken another step closer to paying football for England with the news that she has been selected to attend the latest England U15s training camp at Warwick University later this month.

Lauren was selected for the national U15s squad for its last international match against Holland last May, despite being one of the youngest members of the England U15s set-up – she was just 13 at the time.

Lauren, who now plays as a striker, has been playing football since she was seven years old, and has been part of the Centre of Excellence at Norwich City Football Club since she was nine. She has several U15s fixtures for Norwich under her belt, against opposition such as Chelsea and Arsenal.

Her ambition is to play for the senior England Ladies team.

North Walsham High School Head of PE Paul Bradshaw said, “Lauren continues to work very hard to play at the very highest standard, and her selection for this latest training camp is testament to that.

“We are very proud of her at the school, and we hope that this month’s training camp will be a stepping stone to achieving her first international cap.” 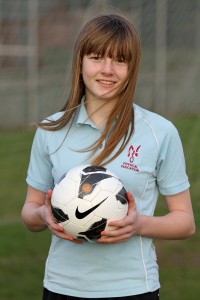