The powerful play has a charismatic rebel as its central character, who is against all middle England society holds sacred.

Johnny ‘Rooster’ Byron is a man living his life on the edge of society in a clearing in a wood. He lives in a caravan and deals in, and is often high on, drugs and alcohol. His lifestyle is a magnet for a group of young people who society has given up on

Rooster is played by Nick Meir, who gives a performance that is disturbing and also very moving. He believes in the spirits that live and have lived in the mythical past in the woodland of his home in Wiltshire. His existence in the forest is under threat as the local council want him gone so they can cover his wood with a new housing estate and they are making plans to evict him.

There is also the annual village fair held on St George’s Day which is the climax of his struggles and battles with the council and the group that surrounds him.

This is a production which questions whether an alternative lifestyle can exist along side the commonplace and it is very skilfully played by the cast. The energy, enthusiasm and talent makes this a compelling production.

The play is running at the Maddermarket Theatre until Saturday (March 24). 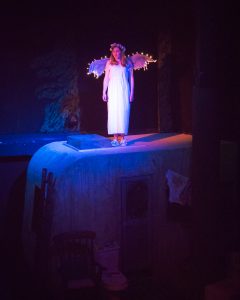