The grade two-listed building, which also houses Eaton Post Office, was open for business as usual today after a blaze broke out in an upstairs office shortly before 3am this morning.

Pye Baker drivers Paul Goodwin and Jamie Hamilton were delivering bread to the 19th-century pub in the early hours when they heard an alarm sounding.

Matt Cowling, Pye Baker manager, took up the story: “When they went towards the door they could hear that it was an inside smoke alarm. They looked around a bit and smelled what they thought was burning so they called the fire brigade and waited ’til they arrived”.

Crews from Earlham and Carrow raced to the scene and put out the blaze, which is believed to have started in a tumble dryer, and damage was contained within one room, according to pub manager Ben Topping.

A pub spokesman said they sent their heartfelt thanks to both Pye Baker and the fire service, adding: “You were guys were brilliant.”

Photo of fire engines at the scene:  The Cellar House 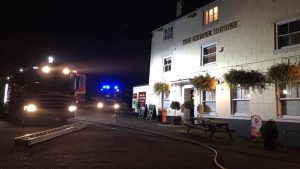