A library garden and a Norfolk orchard are among plans those involved in Sprowston’s community greenhouses project are making for 2019.

Project co-ordinator Mike Ellard is due to meet staff at Sprowston Library at 4pm on January 7 to discuss plans for a sensory garden there and would welcome others to go along to offer support and ideas.

“This could be financially, or help in getting this under way,” said Mike. “Starting from a blank canvas is always quite daunting.”

Mike and other volunteers have started planting a local-varieties orchard outside the project’s base, the greenhouses behind Sprowston Community Hub, on Aslake Close.

“We are looking at planting well-known Norfolk varieties,” said Mike. “It will take a few years to get established. Perhaps we will start a trend at Christmas of eating biffing pie – a Victorian Norfolk tradition – instead of mince pies” (Biffing is a variety of Norfolk apple).

The busy volunteers spent a day selling prepared bulbs in Christmas tubs and pots at Tesco, on Blue Boar Lane, and almost sold out, raising £200.49.

Mike was delighted when a 25-strong team from Norwich-based GoodGym turned up and made short work of clearing one of the glasshouses. GoodGym members combine running with helping communities.

“They cleared all the old tomatoes, peppers, aubergine, and tomatillos which have been quickly replaced with flowers and some other fruit and vegetables. We have rhubarb for forcing, spring cabbage and strawberries have also been planted, as well as some dwarf kiwi fruit bushes,” Mike added. 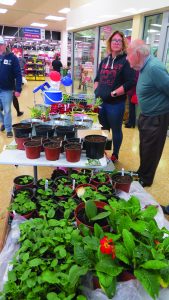 The project’s stall at Tesco’s.